Just added to your cart

Summer Sale: 30% Off All Bundles! Use code SUMMER30 at checkout. 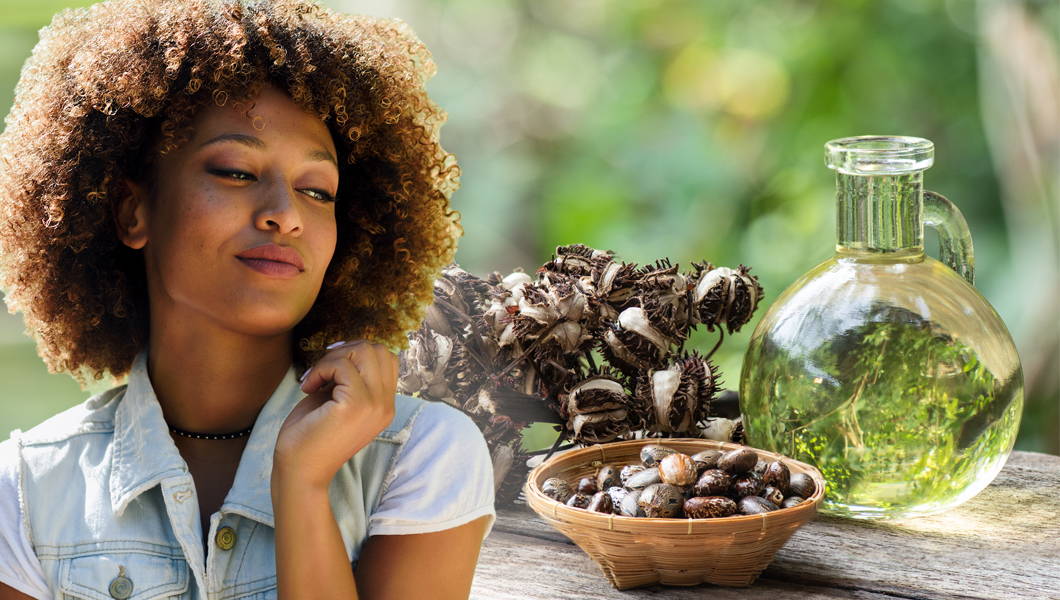 Castor oil has several merits, including strengthening the hair strands, supporting hair growth, and enriching dry scalps. Though the oil itself probably doesn't grow hair, it is adored for its ability to create a healthier scalp environment that improves hair growth. But then, what exactly is castor oil?

What is Castor Oil?Castor oil is the oil obtained from the seeds of the castor plant and castor beans and is known to be very rich in nutrients. It has many therapeutic, domestic, and medical uses and is extensively used in skincare and cosmetics due to its hypothetical healing characteristics.

Although there is no scientific evidence of why castor oil is so beneficial for hair, it undoubtedly is a top-rated oil in the cosmetics industry. Castor oil can be helpful in some cases of hair loss. Unlike most other oils, which can be mostly greasy, castor oil has a nutritional structure composed of a potent mixture of vitamins, non-greasy fatty acids, proteins, and antioxidants.

It's no surprise that the oil is considered a fantastic way to nourish the scalp and fragile hair follicles while supporting fast-growing, healthy hair. For this reason, castor oil is increasingly becoming a key component of hair protection products. 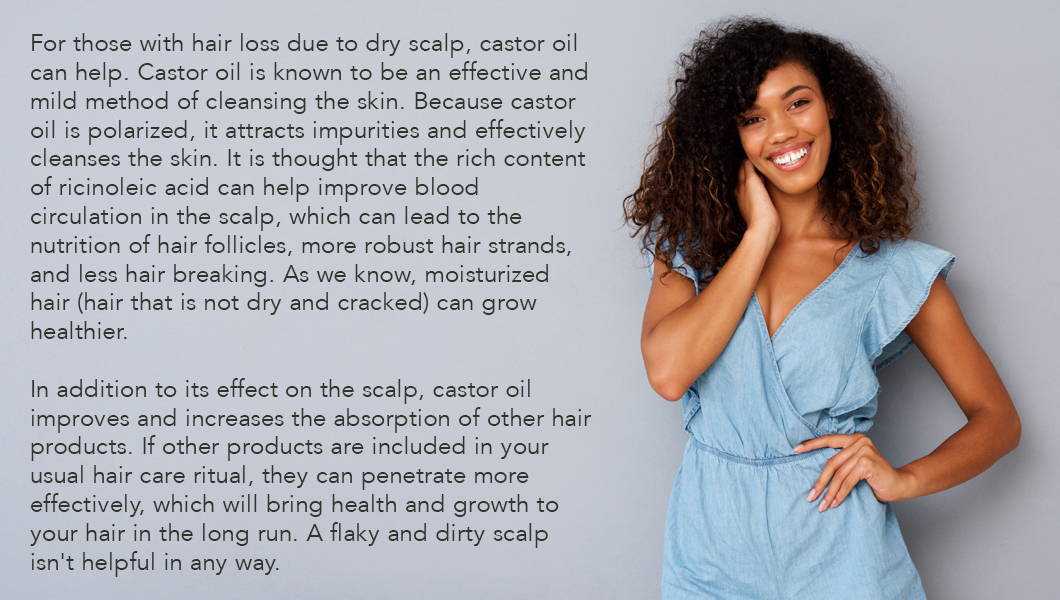 • Split Ends
Applying castor oil to the tips of the hair will prevent the hair from looking dry and curly, thus reducing the visible appearance of split ends. Castor oil can also strengthen the hair, thus preventing breakage and split ends. This thick, rich oil restores moisture at the ends of the hair, covering up the damage, and leaves it shiny and smooth. As hair grows and damaged ends are trimmed, hair is less likely to form more split ends.

• Healthy Scalps
Castor oil contains ricinoleic acid, which possesses antifungal and antibacterial properties that help protect hair and scalp from infections that can cause hair loss. Castor oil also has a high content of omega-9 fatty acids, making it a very effective moisturizer that prevents the scalp from drying out and helps to regenerate healthy hair growth in a few months by massaging into the scalp. This natural oil also serves as a scalp cleanser and effectively removes any impurities and accumulated dirt that could slow down hair growth. 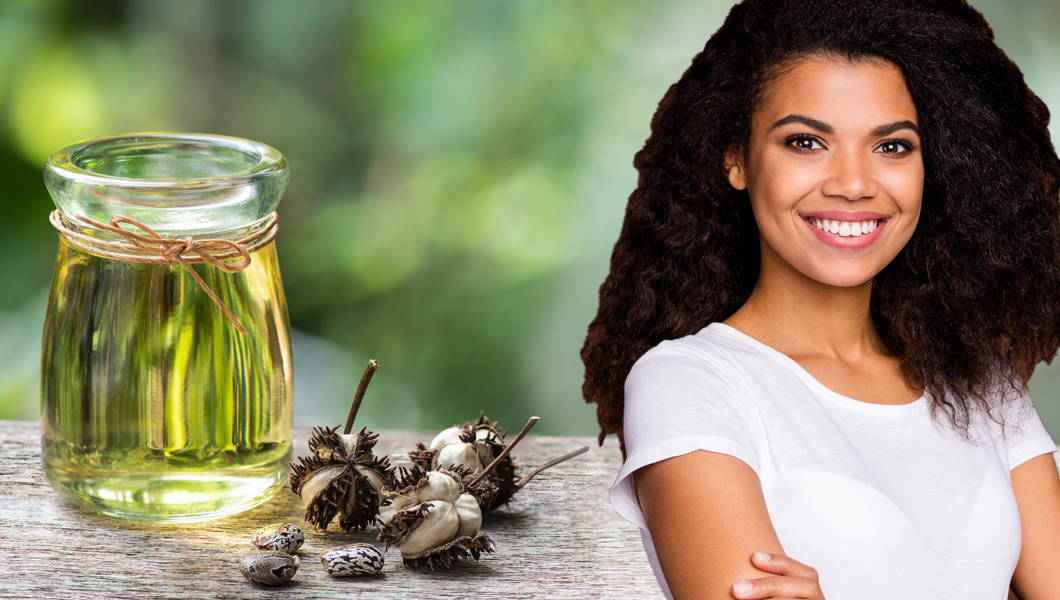 • Moisturization
Due to the high content of fatty acids in castor oil, it is perfect for nourishing and moisturizing the hair. The hair is easily absorbed and can penetrate deep into all layers of the hair follicles. The oil completely covers the hair shaft, smoothes the cuticle, and hydrates it, resulting in silky smooth hair. Castor oil is also known as a moisturizing cream, which means that it has the ability to draw moisture from the air into the hair and scalp, thus strengthening the already strong moisturizing properties.

• Hair Growth
A healthy scalp is an essential ingredient for hair growth, and castor oil, with its ability to remove impurities and unblock hair follicles, is an effective solution for hair growth. Thanks to its moisturizing characteristics, it positively impacts the overall resistance of the hair, which prevents hair loss and breakage. 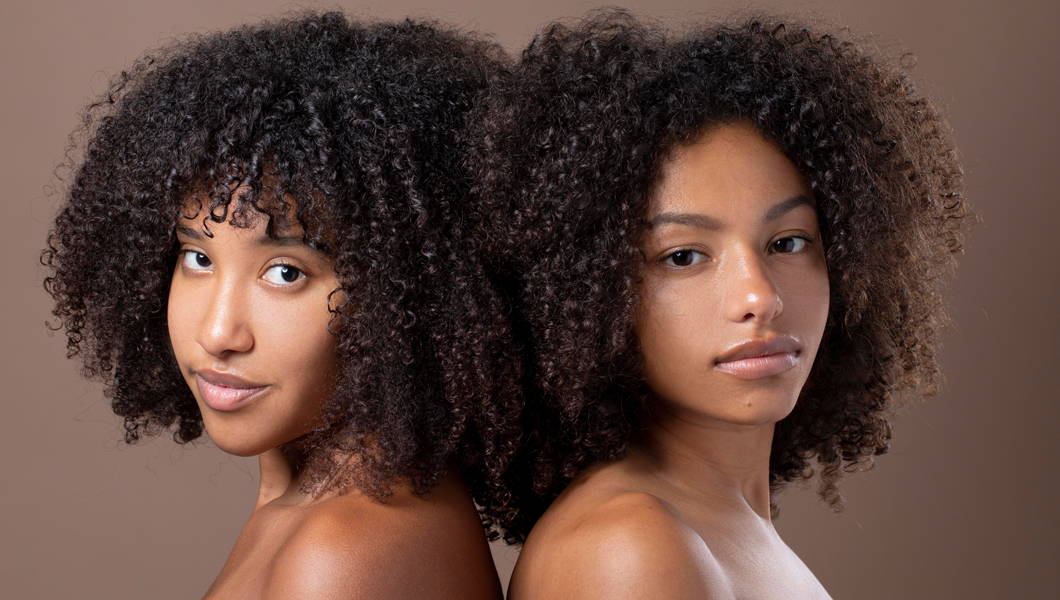 There are no studies to show that castor oil can increase hair growth but people who have used castor oil say otherwise. About ninety percent of castor oil comprises ricinoleic acid, a fatty acid. This compound is known to stimulate the prostaglandin E2 receptor, leading to blood vessels dilation. When castor oil is applied to the scalp, the corresponding blood vessel dilation causes the flow of more nutrient-rich and oxygen-rich blood to the dermal papilla (the power plant of the follicle) also known as the hair root.

Thus, it can be inferred that castor oil contains some natural, hair-loving properties that can create a healthy environment for hair to grow. Consider making castor oil a part of your hair care routine to confirm its impact on hair growth.